As Beijing is to be my adopted home for the next few months I decided I should open with some basic info about the city. Firstly it is HUGE – and I say that as a Londoner – it covers about 6500 square miles, and has a population somewhere around 19 million.

When I first visited the city, 15 years ago there were bicycles everywhere and a smattering of cars. Now there are more cars than you can imagine, and bicycles, whilst still very much in evidence are not the normal mode of transport.

Beijing is more or less the shape of a square, with the Forbidden City in the centre, and no less than 6 ring roads encircling it.  The city is divided into a series of districts or zones, we are based in Chaoyang, which contains the CBD (Central Business District) ie lots of banks, corporate HQs, embassies etc but also has lots of hotels, shopping malls and restaurants.

There has been a settlement on this site for +/- 4500 years, but over that time the city’s fortunes have fluctuated depending on who was in power – the name has also changed several times, first it was Ji, then Zhongdu, then Dadu which was changed to Beiping in 1368 CE; finally in 1421 CE during the Ming dynasty, the Emperor Yongle changed the name to Beijing, built massive fortified city walls, and appointed it national capital. 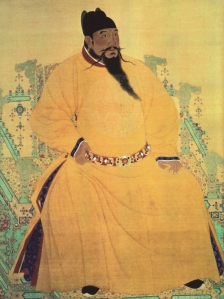 BTW I have called my blog ‘Jasmine Tea & Jiaozi’ because of all the teas in China jasmine tea (moli hua cha) is my favourite, and jiaozi (pronounced jee-ow-dzer) are the steamed/fried dumplings for which Beijing is famous, and which are very, very moreish!

Started my 60s by moving to China with my DH. Surprised to find I am still here in Beijing eight years later - still finding it an adventure!
View all posts by herschelian →
This entry was posted in Uncategorized. Bookmark the permalink.

4 Responses to Beijing – the basic facts