What an orchid situation

There is a Chinese proverb that goes something like ” When you have only two pennies, spend one on bread and the other on a flower” and that echoes my own attitude to life.

Our little apartment is excellent but somewhat impersonal and as we were about to have people round I decided that what was needed was some flowers to make it feel more like home.

So bright and early on Friday morning I set off to find Laitai Flower Market.  It is Beijing’s equivalent of New Covent Garden at Nine Elms. It turned out to be easy to find, and I recognised it at once because it has two huge stone elephants 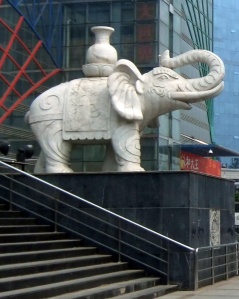 either side of the entrance doors. The ground floor sold every kind of artificial flower you could possibly imagine, and then some, but I wanted the real thing so it was down to the basement where I was immediately overwhelmed by the vast numbers of orchids on sale. The choice was phenomenal, many were already potted up in decorative ceramic bowls ranging from humongous displays which would need a 5 star hotel lobby to do them justice, down to the tiniest most delicate little plant which was in an enamelled dish no bigger than a demi-tasse coffee cup.

But there were more than just orchids for sale,  the basement has 9 ‘streets’ and 3 ‘cross-streets’ and each is lined with individual traders who specialise in one thing or another. Cacti, climbing plants, citrus trees, glossy tropical evergreens, hanging baskets of petunias, bedding plants, herbs, perennials – you name it, they had it. I spent a blissful hour and a half pottering around.

And there weren’t just plants to buy, there were fish, lots and lots of fish, every kind of goldfish or tropical fish seemed to be available in huge tanks or even ready-to-go in plastic bags (remember winning goldfish at a fun fair? I believe that is now banned in Britain). 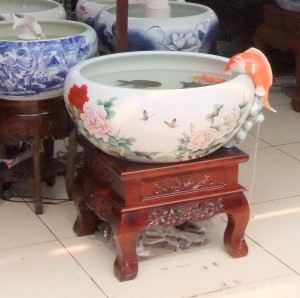 Although fish are kept in glass bowls and tanks like we do in the west, the traditional place for fish was in a very large porcelain bowl on a stand, and there were plenty of those  on sale too.

In case you preferred shell-fish in your bowl there were terrapins – tiny little bright green ones no larger than a thumb-nail, and larger brown or glossy black ones; hermit crabs in their adopted shells, and I spotted some small but exquisitely coloured little crabs with  turquoise blue and black shells each with one bright red claw as large as their whole body. 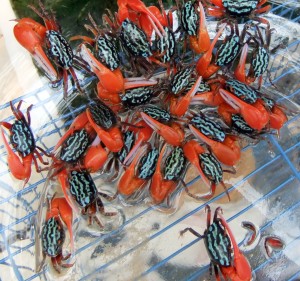 There were also animals – baby animals – fluffy chicks, ducklings, hamsters, voles, a tiny variety of weasel with a black stripe down the back (at least I think they were weasels, my pocket dictionary was not much help in trying to ask what they were), about the only thing I didn’t see was a guinea pig.   Of course that meant that there were traders selling all the appurtenances and foodstuffs for anyone buying the animals and fish.

Finally I wandered through to a big hall where all the cut flowers were being sold, either in large bunches of a single variety or as ready-made bouquets.  I decided to get some oriental lilies in the palest yellow with lime green streaks down each petal.  The price I was quoted for a bunch of ten stems seemed so low by London standards that I completely forgot all the advice I have been given and didn’t even haggle.  The florist was VERY happy, she obviously would have sold them for less, but I was also very happy as they seemed a bargain. What can I say, I’m just a foolish laowei with more money than sense!

On my way back to the entrance I suddenly succumbed to the lure of the orchids, and before you could blink I’d bought two of them as well. It’s lucky I can only carry so much as I could easily have got completely carried away.

I managed to get all the flowers back here in one piece, and they really make the place look so much more my own. I can see I’ll be going back to Laitai regularly.

Started my 60s by moving to China with my DH. Surprised to find I am still here in Beijing eight years later - still finding it an adventure!
View all posts by herschelian →
This entry was posted in Uncategorized and tagged flowers, goldfish, Laitai, orchids, pets. Bookmark the permalink.

2 Responses to What an orchid situation