Beijing has a thousand and one places to eat – actually I just made that figure up, there must be far, far more – and every national cuisine seems to be represented from Argentinean and Italian to Ethiopian and Russian – not forgetting Pizza Hut and KFC!

But more importantly than that, every type of Chinese food can be sampled here. It is possible to go on a complete tour of China, gastronomically speaking, without leaving the city.

Being the greedy person I am, this suits me very well, and I am really enjoying the varieties of cooking – I’ve only had one duff meal so far, and that was entirely my own fault.  I’ve decided that once every so often I should put a restaurant review on Jasmine Tea & Jiozi, so here is the first… cue trumpet fanfare and roll on drums…

Yi Zuo Yi Wang – In and Out –  is a Yunnanese restaurant with a Lijiang theme. We’ve eaten there several times, sometimes in a large group and a couple of times on our own as it is conveniently right next door to Jenny Lou’s, a supermarket I use now and then. 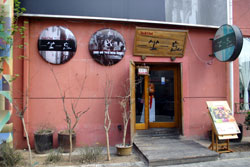 In & Out has a contemporary décor with polished concrete floors, heavy, rustic wooden furnishings and well spaced tables ( something you don’t always find in Chinese restaurants).  The food is from the different cuisines of some of the ethnic minority groups who live in Yunnan province, such as the Bai, Dai, Miao, Jingpo, Wa and Naxi and this is reflected in the staff costumes which are from those ethnic groups.

When AMM and I ate there recently we tried to choose things that were completely new to us, and one of the cold dishes was so good and yet so simple that I intend to try and re-create it myself when I am back in the UK. 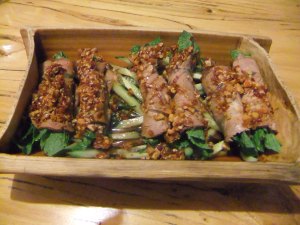 It was thin slices of roast beef rolled round a handful of mint leaves and laid on a bed of julienned cucumber. Finely chopped ginger and a small amount of chopped dried chilli (all the foods in Yunnan are fairly heavy on chilli) had been sprinkled over the beef rolls and then a dressing of soy sauce and dark rice vinegar had been added.  Mint and beef, who would have thought they would go so well together, it was delicious.

We also had a plate of fried potato cake,

Yunnan style which is sort of like a Chinese version of rösti, and a delicate cold dish called Jingpo guiji ( ie: Jingpo ghost chicken) which was finely shredded chicken salad in a light lemon dressing tossed with chopped coriander, fresh chilli, spring onions and herbs.  Then there was a hot dish of fried lotus root with slivers of Yunnan ham.  Yunnan is famous for its ham which is a raw ham similar to the Spanish jamon iberico.

To round things off we had a dish of mu’er (dried wood-ear mushrooms – or as they call it, fungus) tossed with a sort of scrambled omelette. I am quite a addicted to mu’er and tend to order them whenever I spot them on the menu.

We passed on some of the more esoteric menu items such as Bamboo worms, deep fried Bee Pupae and stir-fried river moss – maybe I’ll work up to them in the future!

We ignored the wine list and washed down our meal with a couple of bottles of the very quaffable Dali beer – a lager type beer with 10% ABV.

The bill came to 196 yuan – that is £19.60 for everything, terrific value in my book,  even though many Chinese would consider that as expensive city prices.

Finally, one of the other really good things I have discovered about eating at restaurants in China is that if you can’t finish everything you’ve ordered, you just have to say “ Néng bāng wŏ dăbāo ma?” and it will be instantly packed up into plastic boxes and you can take it away with you.  As we seem to over-order quite often, discovering this custom has been a real joy, as it gives me some lunch the following day!  I took home a doggy bag of  the Ghost Chicken from our dinner at the In & Out.

Started my 60s by moving to China with my DH. Surprised to find I am still here in Beijing eight years later - still finding it an adventure!
View all posts by herschelian →
This entry was posted in Restaurant reviews and tagged doggy bags, Mu'er, restaurants, Yunnan food. Bookmark the permalink.