One of the things many western men do when they visit China or Hong Kong is have a suit made. There are tailors in Beijing, Shanghai and Hong Kong who advertise their services through the big hotels and will make a suit within 24 hours, although the longer you can  let them have to do it the better as it allows for a couple of fittings and any little tweaks that may be needed to get it just right.

The suits are usually very good and are a fraction of the cost of a bespoke suit in the UK.  In fact they cost slightly less than an off-the-peg suit from somewhere like M&S, depending on the fabric you choose.

When AMM came out here some years ago he was recommended a particular tailor’s shop in Yashow clothing market. 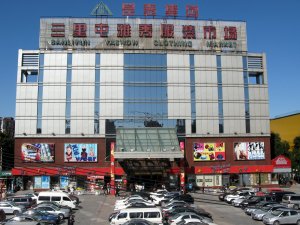 He had a suit made that has served him very well, so when we arrived here in June getting a lightweight summer suit made was high on the list of things to be done.

Off to Yashow we went, and dodging the extremely persistent salesgirls who were trying their best to sell us dodgy Abercrombie & Fitch t-shirts, North Face anoraks, ‘silk’ kimonos etc. (“ Laydee, lookee, lookee, want nice clothes?  I have your size,  make good price for you”), we made it up to Susan’s Tailor Shop on the 3rd floor. 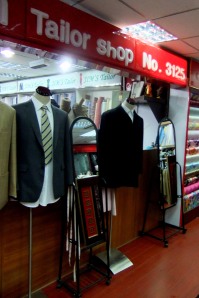 Tucked behind stalls selling all sorts of fabrics, embroidered table linen, bedspreads, cushion covers and so forth, are half a dozen tailors’ shops. They all have female names, I’m not quite sure why as all the tailors are male (and we’d been told that the best tailors all hail from Shanghai originally).

A great deal of time was spent pouring over bolts of cloth, discussing the quality, colour, weight, composition etc and then having made a selection, endless measurements were taken.  At my

suggestion, AMM had brought the jacket of a favourite Italian suit (trousers long defunct) with him, and so Peter the tailor knew exactly what he wanted as it just had to be copied.

A week later he went back for the first fitting, some minor adjustments had to be made to the way the collar sat, and then three days later it was ready. Being extremely practical I had suggested we get two pairs of trousers made so that if one pair wears out – and inevitably they do – there would be a back-up pair and he wouldn’t be left with just the jacket. Oh what a clever little wifey I am!

Since then another suit has been made, and four shirts – all copies of a Jermyn Street shirt, but with short sleeves, in pure cotton, each costing the princely sum of £14 including fabric.  AMM hails from Aberdeen, and as he said ‘this brings joy to a Scotsman’s heart’!

One thing I have noticed about these tailors, they are almost exclusively patronised by ex-pats and visitors. The Chinese men we know are surprised we use them as they think that anything with a brand name that shows off your wealth MUST be better. Manufacturers such as Armani, Ermenegildo Zenga, Versache et al stitch a label on to one of the sleeves of the jacket and it is supposed to be removed once the jacket is sold, but many Chinese leave it on just to advertise that they can afford the best!

Started my 60s by moving to China with my DH. Surprised to find I am still here in Beijing eight years later - still finding it an adventure!
View all posts by herschelian →
This entry was posted in Uncategorized and tagged men's suits, tailoring, Yashow. Bookmark the permalink.

3 Responses to Ooh – suits you sir!