Its time for another restaurant review, and this time it’s a Shanxi restaurant.  Shanxi (not to be confused with Shaanxi) is an inland province to the south west of Beijing, in a region famous for its cereal crops.  It is a province where the noodle reigns supreme. Of course you can have noodles all over China, but in Shanxi they are fundamental to the cuisine. I’ve read that the province has contributed no less than 260 varieties of noodle to the culinary gene-pool. The province is also famous for superb aged vinegar.  As it has a very low acidity (4%)  it is almost sweet , making it the Balsamic vinegar of China so to speak , and over the years I have brought a bottle or two back to the UK as I like it so much. Some Shanxiren will even drink a small cup of it every morning.

There are several excellent Shanxi restaurants in Beijing, but The Noodle Loft is conveniently close to where we live, so it tends to be my first choice when I’m in the mood for a noodle or two.   And at the Noodle Loft they take them very seriously indeed.  The restaurant is very modern, almost minimalist in décor, with a large open-plan cooking area running along one side. Here you can watch the noodle chefs at work making the noodles and cooking them in vast stainless steel tubs of boiling water. There is much pulling, twisting and kneading and slapping of noodle dough going on. 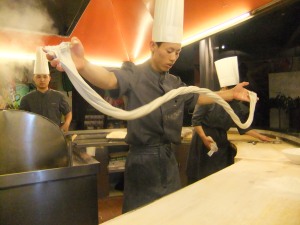 I learned that there are many methods for making the noodles.

The names of the types of noodles that are made by these methods are almost poetic: ‘In the air’ noodles, ‘Cat’s ear’ noodles, ‘fish-like’ noodles, ‘honeycomb’ noodles…the variety seems endless. 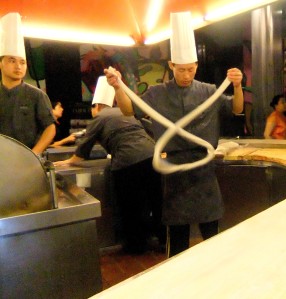 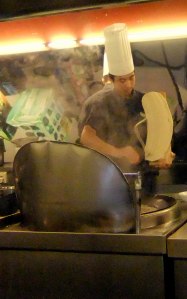 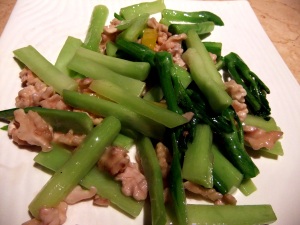 We had some cold appetisers whilst our noodles were being made, the first of which had stalks of a green vegetable, I think it was mustard cabbage,
tossed in a light dressing together with fresh white walnuts – I’ve had these walnuts in dishes several times in the past weeks and haven’t yet figured out if they are a seasonal delicacy or available all year round, certainly I haven’t seen them on sale anywhere, just the common or garden walnuts we all know. 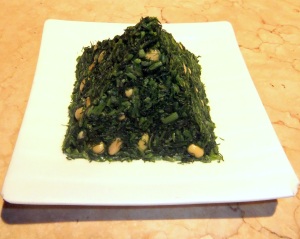 Our second cold dish was a little pyramid of green and white, finely chopped fennel/dill studded with white beans. It was interesting, but I found the taste of so much dill rather overwhelming.  There was also a dish of finely shredded carrot which had been dressed with ginger, vinegar and a hint of chilli.

Finally our noodles arrived. They are always served unadorned in a big bowl with smaller bowls of the sauce you have chosen served separately, and you can then add as much of it 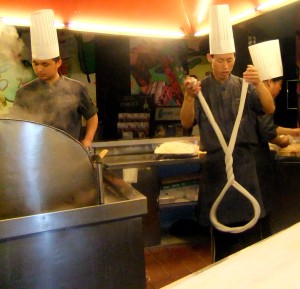 as you want to the hot noodles . We had opted for ‘scissor cut noodles’ with  shredded pork in soy gravy as our sauce.  The noodles were wonderful, slightly chewy, irregular ribbons that beat any dried noodle I’ve ever had into a cocked-hat. Satisfyingly filling.

A couple of bottles of Tianjin beer was the perfect accompaniment, and the whole lot came to 120 kuai  – that is £12, and worth every penny for the sheer entertainment of watching the noodles being made.

Started my 60s by moving to China with my DH. Surprised to find I am still here in Beijing eight years later - still finding it an adventure!
View all posts by herschelian →
This entry was posted in Restaurant reviews and tagged Antony Bourdain, dill, knife-cut noodles, making noodles, Noodle Loft Beijing, noodles, restaurants, Shanxi, vinegar, walnuts. Bookmark the permalink.

2 Responses to Oodles of Noodles