Posted on September 5, 2010 by herschelian

Yesterday the weather was fabulous so AMM and I decided to spend the day at 798 which is the art district in north east Beijing.   It would be impossible to cover the whole area in a single visit, and so yesterday we concentrated on seeing the outdoor sculpture, and just soaking up the atmosphere.

It is a huge area, and has a fascinating background history.  In the early 1950s the Danshanzi area – then farmland – was chosen to be the site of a large military-industrial complex, at the centre of which was a factory for producing electronic components for China’s military. East Germany and the fledgling PRC co-operated to build the complex, with East Germany providing the designs, expert advice and equipment.

The whole complex was built to a high specification, the design following the Bauhaus style where ‘form follows function’.

The main factory was called ‘Joint Factory 718’ (All Chinese military factories had names beginning with the number 7). Eventually the factory was divided into smaller factory units, the largest of which was number 798.

Eventually following the Deng Xiaoping reforms of the 1980s, the factories were deprived of government support, and their use withered away. The area lay semi-derelict, with the factory workers having to find other employment. 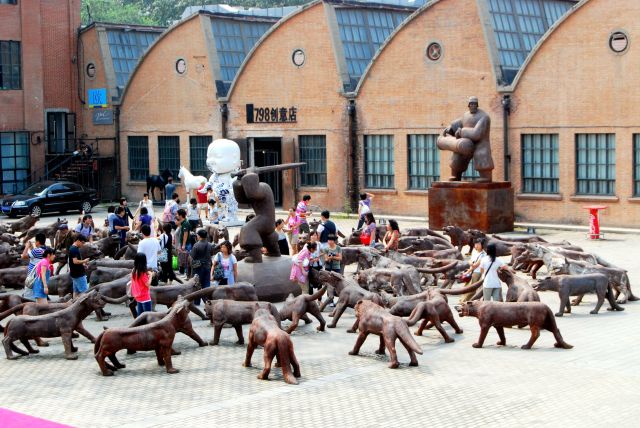 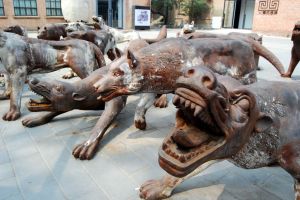 At that time, avant guarde art, which was disapproved of by the establishment, had to exist at the margins of the growing city, In the late 1990’s Central Academy of Fine Arts needed larger workshops and took over part of one of the factory buildings. They were followed by an arts bookshop and a few artists who rented studio space. Gradually more and more artists and modern art galleries were attracted to the area and a thriving community sprang up. The largest gallery to open -in 2002 – was called

Space 798 and that gave the name to the whole area.

Today there are no less than 400 galleries, craft shops, workshops, and studios and a café culture has developed, with nightclubs, trendy bars, a boutique hotel and several excellent restaurants.

nowhere, make such a contrast with the bright art 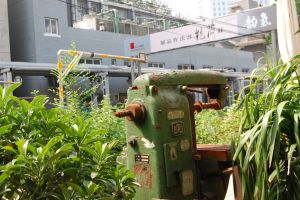 like so many ghosts of the past ,are old pieces of abandoned industrial machinery. 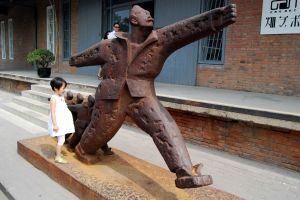 Visitors to Beijing usually make a bee-line for the Forbidden City and the Great Wall, but they should include 798 on their ‘must-see’ list, it shows so much of what China was, is now, and where it is going in the future. 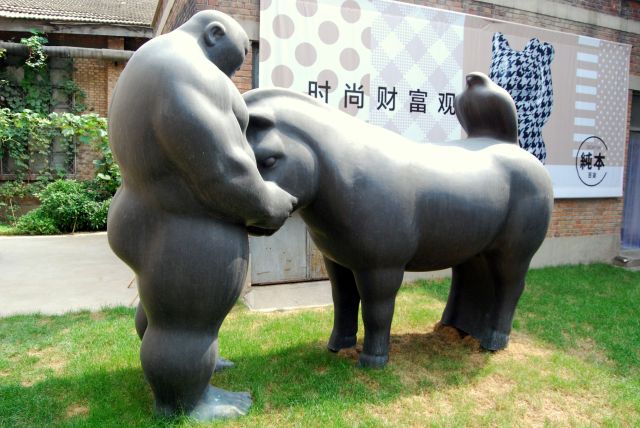 The pictures  in this posting are just a taste of the many outdoor sculptures – and we only covered about quarter of the whole Art Zone – we will be going there again and you will have further treats in store!