Attack of the Hairy Crabs

Every year in October one of China’s most prized gourmet delicacies hits the market… the Hairy Crab. Eriocheir sinensis, for those of you who like the full Latin nomenclature – are called dazha by the Chinese – aka the Chinese Mitten crab. They live in fresh water, but every autumn they move down river to where fresh water meets the salt water near a river mouth. 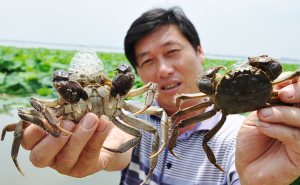 These little blighters cost a fortune and are highly prized, the most desirable of them coming from Yangcheng Lake near Suzhou. They are smallish – the body of the crab being about the size of a human palm, dark grey in colour until cooked (then they turn red) and their claws have what looks like a cuff or glove of fur/hair on them, hence the name ‘Mitten’ crab, ‘Hairy’ crab etc.

You buy them live, all tied up with twine to stop them nipping you or escaping, and the Yangcheng crabs have a special plastic security tab attached so you know you are getting the genuine article and not a crab from some dodgy source.

Mind you, I’ll bet someone here in China has figured out a way of faking them- if they can do it for Prada handbags they sure as hell can do it for crabs.

All the big five star hotels here in Beijing are running ‘Hairy Crab’ promotions in their restaurants with ads in all the local papers. In Shanghai where they are regarded as a ‘local’ speciality the restaurants along the  Bund are practically crawling with them figuratively speaking.

Why are they so prized? – because of the crab roe the females produce in autumn which is said to be seriously delicious, and their superb flavour at this time of year. They are only in season (pardon the pun) for a short period when they are sexually active, although I suppose that technically you could eat them all year round. I’ve only tried them once, two years ago when someone else was buying, and have to admit I was somewhat underwhelmed.  There is very little meat on them , and I thought the roe was so-so.

As a species the Chinse Mittten crab is very, very invasive and they are banned in the USA. I read an article in The Independent newspaper last year which said that they have been breeding in the Thames for nearly 100 years and the river is now hotching with them.
Given that a single male crab weighing about 200g is retailing in Beijing for approx 120 yuan (£12) this year, why don’t David Cameron, Vince Cable et al get down to the river and start hauling them in? Export them to China and it could plug a hole in the national deficit.

As a food Hairy crabs are considered to be ‘Yin’ – that is to say they have cooling properties on the body (even if you eat them hot), and so when you eat them you should always balance them with something ‘Yang’ and this is usually Ginger Tea (tea made with Pu’er Tea, ginger and ice sugar) or with a cup of yellow Shaoxing wine.

I asked a couple of people what was the best

way of preparing them, and a rather heated debate ensued as various opinions were given.
The most common recipe seemed to be to steam them over boiling water for 10-15 minutes and half-way through the steaming pour some beer over them, then serve them with a dipping sauce made from three tablespoons of Zhejiang vinegar, one tablespoon finely chopped ginger, and a heaped teaspoon of sugar all whisked together.

Finally, to give you a touch of culture, the 17thC playwright and erotic novelist Li Yu (see the Penguin edition of his novel ‘The Carnal Prayer Mat’), absolutely adored eating these crabs and he wrote:
‘While my heart lusts after them and my mouth enjoys their delectable taste (and in my whole life there has not been a single day when I have forgotten them), I can’t even begin to describe or make clear why I love them, why I adore their sweet taste, and why I can never forget them… Dear crab, dear crab, you and I, are we to be lifelong companions?’

Started my 60s by moving to China with my DH. Surprised to find I am still here in Beijing eight years later - still finding it an adventure!
View all posts by herschelian →
This entry was posted in Uncategorized and tagged crab, dahza, freshwater crabs, gourmet delicacies, hairy crabs, Li Yu, River Thames, shellfish. Bookmark the permalink.

3 Responses to Attack of the Hairy Crabs