I have never been one of those ‘Ladies Who Lunch’ but here in Beijing I am beginning to think that I might fancy becoming one. Yesterday a Chinese friend and I agreed to meet for lunch – I wanted to pick her brains about a project I have in mind – and the restaurant I chose was Alameda. It is right across the alley from the little place where I have my manicures and pedicures done, and I thought it looked an ideal spot.

Alameda is purportedly a Brazilian restaurant, but there didn’t seem to be anything overtly Brazilian

about it as far as I could tell from this one visit. It is a light bright place; part of the restaurant has a glass roof and it has clean modern lines; crisp white table linen and sparkling glassware make you feel you are in a place where standards are high.

When we arrived at just after 12 noon, the place was buzzing, the restaurant was almost full and despite the fact that they had my reservation noted for the wrong day, we were very courteously welcomed and shown to a table in the main room. They offer a prix-fixe lunch menu of 68 yuan (£6.80) for two courses, excluding drinks. There were about eight choices for starters, and the same for main courses  with options for vegetarians – as I rarely eat dessert I am ashamed to say I didn’t even look to see what was on offer for that course.

DN and I had both expected that the menu would be heavy on meat which shows how we both had stereotypical ideas about Brazilians! In fact the menu is most imaginative and we pondered for quite a while before making our selection.

As soon as we were seated and menus had been provided, a plate of three different breads and some herb butter arrived. The breads were obviously made in-house, and we 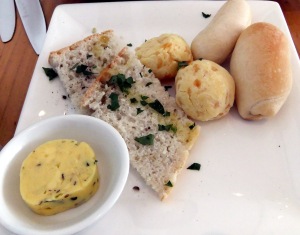 I chose Marinated scallops with Pea Shoots, Garlic Toast and Caper Salsa as my starter, whilst DN chose Asparagus and Arugula salad with Feta and Olives. We both opted for Broiled Fish(Tuna, Salmon & Tilapia) with a Noodle Salad as our main course.

My scallops were divine, juicy and plump. Almost hidden under a lightly dressed tangle of pea sprouts, they had been sliced horizontally and then marinated with a julienne of 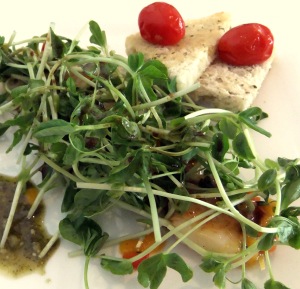 smoked red and yellow peppers. Two slices of garlicky oven toast topped with oven roasted baby plum tomatoes and a spoonful of tangy caper salsa on the side completed a dish that I have no hesitation in awarding full marks.

I don’t know DN well enough (yet!) to ask her if I could try a taste of her starter, but she said it was delicious.

The Broiled Fish we had ordered was perfect,  three lightly grilled pieces  stacked up beside some rocket and a heap of fine rice noodles which had a very delicate dressing. Service was attentive but not intrusive, and unlike some restaurants at lunch time we never felt we were being hurried, or hustled to leave.

With a large bottle of Perrier (I know, I know imported bottled water – pretentious) the bill came to a very modest 198.00 yuan (£19.80) and for food of this quality, with this ambience, in one of the world’s great capital cities, I think that it was a bargain. I shall be recommending the place to all my BJ friends and will definitely be going back – soon.

You see, I am becoming one of the LWL!

Started my 60s by moving to China with my DH. Surprised to find I am still here in Beijing eight years later - still finding it an adventure!
View all posts by herschelian →
This entry was posted in Restaurant reviews and tagged Alemeda, bargain, Ladies who lunch, lunch venue, restaurants. Bookmark the permalink.