A tribute to my father

Born in Falmouth, Cornwall to Scots parents, he and his siblings Alec, Sylvia and Bobby, were educated at Dollar Academy in Clackmannanshire, Scotland which was near the family home.  He started to train as an architect in 1939.

When war was declared he joined The Royal Scots (the oldest British regiment) and was sent out to India in 1940 as an Officer Cadet. 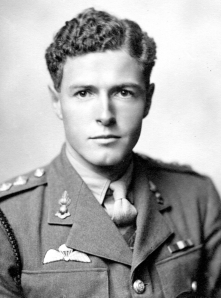 After officer training with the Indian Army and learning to speak Urdu, he joined the 402 Field Company of the Royal Bombay Sappers & Miners. He spent most of the war in Burma creating airfields in the jungle, building bridges etc, whilst fighting the Japanese for which he was mentioned in Dispatches. By 1945 he was an acting Major and with other officers was sent to Bangkok in to take the surrender of 100,000 Japanese troops. The lasting legacies of his wartime service were the almost complete loss of his hearing, a loathing of pineapples, and a deep affection and respect for the Sikhs and their religion.

After the war he returned to Scotland and started his diploma course in Architecture at Glasgow School of Art. This was a five year course, and in order to make up for the time he had lost during the war he determined to do two years simultaneously! Obviously he was more than capable of doing this as he subsequently won several prizes and a  travel bursary.  At Glasgow he met my mother who was also studying architecture and they married in 1948. After gaining his Dip.Arch., he did a post-graduate degree in town planning.

Dad felt that he would have more scope to practice architecture in a new country, and when he was offered a place in a new practice set up by an old army comrade who had moved to Africa, Dad decided to join him.  The practice was in Lusaka, capital of what was then Northern Rhodesia. In the early 1950s it was still very much a pioneer community and Dad was active not only as an architect,  he also served on the Lusaka council for many years – helping to create the infrustructure of  the growing city,  much of which is still being used today. Dad’s architectural and town planning practice grew and grew. He was appointed as architect to the Roman Catholic Church despite being a Scottish Presbyterian, and designed convents, chapels, missions, and schools for them – not forgetting the Roman Catholic Cathedral in Lusaka.  Breweries, banks, cement factories, a leprosarium, and the only American Embassy that has ever been designed by a non-American architect – the list of his work is long and varied.

For my sister and I it was a childhood filled with the scents and sounds of Africa, and the wildlife was prolific, now alas, poaching and of course the ever increasing population who have have cleared more and more of the untamed bush  for habitation and cultivation has  has reduced the abundance of the great animal herds – elephant, buffalo, gnu, etc to a fraction of what we took for granted. And since independence Zambia has gone the way of many African countries riddled with political corruption at many levels, and weakened by the scourge of AIDS.

Zambia became independant in 1964 and a couple of years later our family moved to live in Capetown, South Africa where my sister and I were already at boarding school.  Dad joined Murray & Roberts, one of South Africa’s largest construction, engineering  and property development companies.

In 1972 my parents decided to return to live in the UK, they had never been easy about the politics of South Africa, and felt that as both their daughters were in the UK at that time and likely to remain abroad until the Apartheid regime was over, it would be better to make such a major move whilst they were still young enough to adjust.   At first they lived in Sussex and Dad commuted to London where he had joined the firm of Ian Fraser & Partners. He travelled a great deal working on architectural projects in West Africa, Algeria and Saudi Arabia.  Then, typically, my parents were ahead of the trend, buying a house on the banks of the Thames on the Isle of Dogs – this was before the huge Canary Wharf development took place and many of their friends and family thought it an eccentric purchase.

Eventually they decided to move north to Scotland, where they bought an old house on the harbour in the East Neuk fishing village of Pittenweem.  There they settled very happily and Dad was soon immersed in the local community, taking on the task of turning a disparate group of old buildings into the National Scottish Fisheries Museum in Anstruther. There was little money in the kitty for this and so everything had to be done on a shoestring. The museum went on to win numerous awards including one for best access for the disabled.  The biggest technical challenge he gave himself was how to fit an old fishing boat, ‘Zulu’, inside an ancient pub which was to be incorporated into the museum. Many in the local design and building industries thought it could not be done, but fortunately his plan succeeded, with only a few feet to spare – and now it is one of the most popular attractions in the museum.

He also devoted much time to his old alma mater, Dollar Academy, and was seconded onto the Board of Governers.  He was kept busy well into his 80s designing and supervising new buildings for the school and the modernisation and refurbishment of existing ones.

Extremely gregarious, with a wide circle of friends, he was an active member of the local Probus Club, and he and my mother enjoyed busy social life.  For his 90th birthday present he requested a new laptop as his old PC was on its last legs and he wanted to be able to access GoogleEarth and surf the internet.
He had a Skype date every Monday evening at 8pm.  He and his old pal Jimmy Locke (aged 92) who lives in Vancouver would connect with each other and gossip away like two old fishwives!

He enjoyed a great relationship with all his four grandchildren and their partners.  Famous for singing silly songs, composing crazy poems, (last December before his radiation therapy he was singing a ditty he called ‘The Melanoma Rap’) he never lost interest in the world around him, he had strong views on most subjects and would defend them vigorously.  On Tuesday, the day before he died, an old friend who is a retired Professor of Mathematics came round to have a coffee with him and they spent over an hour  discussing the Hadron Collider and whether the scientists working on it had discovered the ‘God particle’.
An avid reader, he was one of Anstruther library’s most prolific users and the librarians there regarded him as a friend and would actively seek out new books they thought he would enjoy, and on occasion they would deliver books personally to the house.

Although he had always been a dab hand with a kipper, or grilling meat on a braai, it wasn’t until his 70s that he started to really enjoy cooking – and he specialised in sauces and gravies, which he felt were an essential component of any meal!  When the domestic bread-maker was invented Dad was in his element, and every morning the delicious smell of a new baked loaf would greet you as you entered the kitchen. In fact he put loaf on to bake the night before he died, but did not survive to enjoy it himself.

My mother, my sister and I will miss him more than words can say.

Started my 60s by moving to China with my DH. Surprised to find I am still here in Beijing eight years later - still finding it an adventure!
View all posts by herschelian →
This entry was posted in Uncategorized and tagged Dad, tribute, Walter Faulds. Bookmark the permalink.

14 Responses to A tribute to my father