I’m back in Beijing again, and just in time for Duanwu Jie aka The Dragon Boat Festival which takes place on the 5th day of the 5th lunar month each year.  As with every Chinese festival, there is a specific food one is supposed to eat – in this case zongzi,

and they are on sale everywhere. 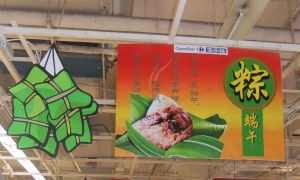 The Duanwu festival began  some 2000 years ago during the The Warring States Period in Chinese history (475-221 BC) to commemorate the death of Qu Yuan,  and is celebrated by eating zongzi  and Dragon Boat Racing.

Qu Yuan was a famous poet and statesman who was concerned that his home state of Chu was in danger from the State of Qin, and tried to warn the King of Chu that they should arm themselves in preparation for an attack. He was opposed by the aristocrats who succeeded in getting him deposed from his position and sent into exile.  When he learned that the Qin had conquered the capital of Chu he was in despair. He clasped a large stone and plunged to his death in the Milou River. Local people raced their boats up and down hoping to find him, whilst others threw  hundreds of zongzi into the river in an attempt to attract the fish and stop them eating the poet’s body.

This afternoon I was invited to join a group of others to learn how to make zongzi for the festival.

Zongzi are glutinous rice dumplings which have been wrapped in bamboo or reed leaves and then boiled or steamed.  They can have a variety of fillings. I sampled some savoury ones with a ham and nut filling, but the ones we made had a filling of jujubes (a type of Chinese date) which had had their stones removed and were stuffed with honey.

First you buy your leaves for wrapping from the market, and soak them in fresh cold water for a day.  You also soak glutinous rice (nuomi) in water for 24 hours.  Then you get your production line ready with the container of soaking leaves,

the container of soaking rice, the filling you intend to use, and a whole lot of pre-cut lengths of twine – each about 18 inches long. 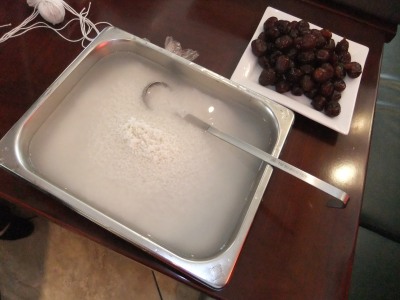 You will need a tray to put the assembled zongzi on as well as a couple of large saucepans full of water.

Take a soaked leaf from the water, and holding it in your left hand (bear in mind I am right-handed, do the opposite if you are left-handed) fold the ends over each other to make a cone – make sure there is no ‘hole’ at the peak of the cone. Put a spoonful or so of the drained soaked rice into the cone so that it comes about half-way up. 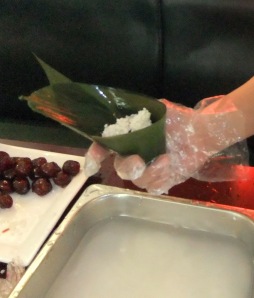 Insert the filling – in my case a couple of jujubes – and then cover them with more rice, pressing it down firmly.

Fold the excess leaf over the mouth of the cone so that it is completely covered.  With your right hand, take one of the pieces of twine and drape it over the base of the cone so that one side dangles about 3-4 inches, hold this in place with your left hand whilst you wind the twine firmly round the zongzi at least three times making sure all pieces of leaf are tucked under it. Then tie off the twine with the length you have held in your left-hand. Do this quite tightly.

It sounds more complicated than it is, and when you have done one or two you soon grasp the technique.  When a whole trayful of zongzi are prepared, put the water in the saucepans to boil, and when boiling  carefully add your little green pyramids. You can cram the pan quite full.  Boil gently for 40 minutes to 1 hour.

That’s all there is to it.

Obviously you cut the twine and remove the leaves before eating, but you can serve them hot or cold. Or go and throw them in the nearest river!

Started my 60s by moving to China with my DH. Surprised to find I am still here in Beijing eight years later - still finding it an adventure!
View all posts by herschelian →
This entry was posted in Recipes and tagged Chinese festivals, Dragon Boat Festival, Duanwu Jie, festivals, jujubes, nuomi, Qu Yuan, Zongzi. Bookmark the permalink.