Names have been much in the news and on my mind.   First there was David Beckham and his wife Victoria -aka Posh – naming their fourth child (a daughter)  Harper Seven.  An interesting and original choice, and it has engendered a great deal of discussion in the media. 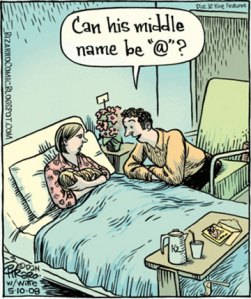 My own DD is expecting our first grandchild later this year, and she and her husband have 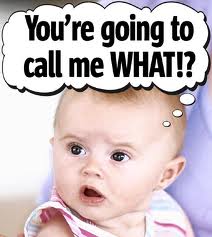 been making me nervous by suggesting names that make my hair stand on end!

Back in the day, I once sat next to David Bowie and his (then) wife at a film premiere and they were discussing the baby-sitter for their baby who had been named ‘Zowie’. I remember saying to a friend – ‘who names their kid  Zowie? he won’t want that name, it’s crazy.’   New Zealand has decided to ban bizarre names from being registered. 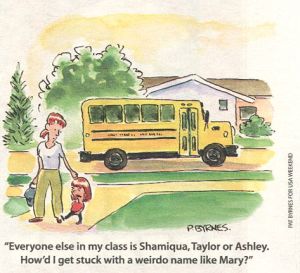 Chosing a name in China is a serious business. The Chinese still attach a great deal of importance to the meaning of a name; once upon a time the same was true in our own culture.  When a baby is born in China, the family have major discussions. The infant’s name is very important, its meaning is thought to influence the child’s character and life, and naturally most parents want a good life for their child.

Names reflect the attitudes of the time. During the Cultural Revolution in China thousands of children were named with uplifting phrases such as Jianguo (Build the Country) or Yonghong (Forever Red) – which would assure the powers-that-be of the family’s revolutionary fervour.  Then there were some peasants who worried that their children would be preyed upon by evil spirits, and gave them rather awful  names in the hope that this would deter such demons –  such as Goushong (Dog’s leftovers) and Goudan (Dog Turd)!!  I kid you not.

Girls are often given flower names – I was told that Mei or Mei Hua which means Plum Blossom is probably the most common female name in the country – or soft names invoking moonlight and silver waters etc.  However in areas where sons were the desired infants, and girls arethought of as a burden on the family  they might be given a name which reflects that attitude such as Zhaodi (Bring along younger brother).

As you can imagine it was with some trepidation that I asked a Chinese friend to help me find myself a Chinese name.  DN and her parents  – who are all from the middle-class intelligentsia – took my request very, very seriously. They have met me several times and so they felt equipped to choose a name that would reflect my personality.   A week or two passed and then I was told that the perfect, appropriate name had been decided upon – Mai Zhi Ying.  They did give me a couple of alternatives, but we all felt from the get-go that Mai Zhi Ying was the exactly right name for me.  I loved the sound of it (in English the pronunciation would be: ‘ My jer ying’),  I showed the name to one or two other Chinese friends and they all exclaimed (quite spontaneously)  that this was wonderful name. 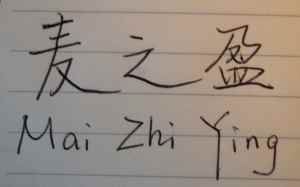 So feeling very happy about it I went off to ‘culture street’ in Beijing to find a ‘chop’ carver [more on chops in another post] so that I could have my new Chinese name carved in stone.

That evening I had to accompany AMM to a company dinner (we were the only westerners) and during a lull in conversation I pulled a slip of paper from my handbag on which I had stamped the chop with my new name – I proudly passed it to a senior colleague of AMM who took one glance at it and then launched into an impassioned speech before passing it to another senior colleague (this time a woman) and he then turned to me and said ‘You cannot use that name it has a bad meaning’,  I was aghast – and even more so when his female colleague concurred. The name was doomed !  I asked why and was told that it could be misread as having something to do with prostitution – no-one would be more specific than that. Oh Dear.

My chinese tutor looked at the name and she simply couldn’t see a problem;  she assured me it was a really feminine and elegant name. But now there was a dilemma, I could hardly ignore my dear husband’s colleagues views, and what – god forbid – if they were correct and my name had an unsavoury meaning.  On the other hand, it would be insensitive in the extreme to suggest that my Chinese friend DN and her parents had chosen a ‘bad’ name.  What was I to do?  I decided to send the name on the chop to another Chinese friend, someone we have known for many years , I emailed her and attached a file showing the name on the chop.  Within minutes she emailed back – the name could not be used like that, however she and her husband would think of a suitable new name for me.  And so they did.  Chinese name no.2 was: Mai Juan Na.

I emailed this new name to my husband’s colleagues and they all gave it the thumbs up, although I have to admit I did not like this new name half as much as my original name. Sigh…

Last weekend we had a dinner party and among the guests were a young Anglo/Chinese couple who have a two-year old daughter. During pre-dinner drinks the subject of names came up (their little girl has two of course, one Chinese, one English). I told them the story of my dual name and they were intrigued, the wife (Chinese) asked to see the chop – and the minute I showed it to her she identified the problem.  There was nothing wrong with my first Chinese name per se, but the way it looked on the chop meant it was possible to misread it. The design of chop I had chosen was a square, my name had three characters and the carver had added the word for ‘her seal’ (which is quite a usual thing to do) thus giving four characters. 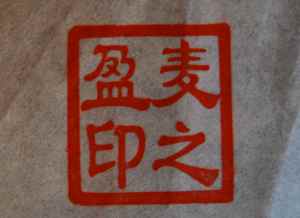 I was relieved to have an explanation for the whole f***up, but I was still on the horns of a dilemma. I didn’t want to offend the friends who had selected Mai Juan Na as a name or cause them to lose face, and the same applied to AMM’s colleagues who expected me to use it.  On the other-hand, I liked the first name and didn’t want to cause loss of face to DN and her family by abandoning the name they had chosen for me.  Tricky!

Finally I decided I would have two Chinese names  – Mai Juan Na for AMM’s colleagues and our old friends who selected it; and Mai Zhi Ying for my personal life and for DN and her family.

Off I went to get two new chops carved.  This time I had the characters Mai Zhi Ying carved in a single line so there was no possible ambiguity, and then had a fairly straight-forward chop for Mai Juan Na.

Now all I have to do is remember which name is which when I am introduced to Chinese people – depending on what company I am in!

Started my 60s by moving to China with my DH. Surprised to find I am still here in Beijing eight years later - still finding it an adventure!
View all posts by herschelian →
This entry was posted in Uncategorized and tagged baby names, Chinese culture, chinese names, choosing a name, loosing face, meanings of names, names. Bookmark the permalink.

8 Responses to Choosing my Chinese name – it’s a minefield