Over the last ten days or so t

here have been disturbing reports about snakes being seen in some outer areas of Beijing and surrounding villages. Then yesterday there was a report about a pet dog being bitten by a rattlesnake when being walked in one of Beijings parks – gosh! A Rattlesnake…how could that be?  I’d always thought that Beijing had no venomous snakes. 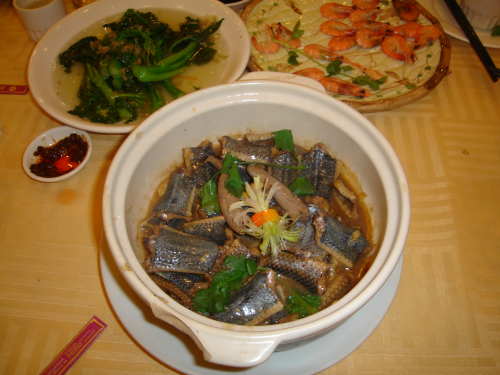 when it would have been sautéd with some ginger and garlic.  Or, in a  Traditional Chinese Medicine (TCM) pharmacy in a bottle of ‘Snake wine’.

So what was going on? 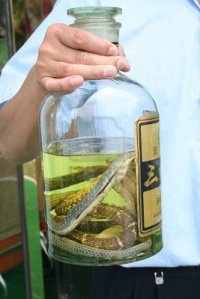 It turns out that at this time of year groups of Buddhist animal rights activists go to the big markets and buy up as many snakes as they can so they can be released into the countryside thus saving them from their intended fate.

Here I will have to digress a bit to explain why they do this. Fang sheng or animal release is often practiced in China; indeed in various places in China I have noticed men with cages full of little birds for sale outside the gates of Buddhist temples – the idea being you buy the birds and release them thereby improving your karma by showing compassion. If you apply this practice to the four animals which are considered sacred , namely snake, hedgehog , fox and weasel, you are thought to get even greater karmic benefit.  A few years ago one of these Buddhist groups released a large number of foxes, bred for the fur trade, right next to a 20,000 bird chicken farm  – carnage ensued.

Anyway, back to the snakes – the major incident last week was when the Beijing Shifang Mercy Group pitched up on the outskirts of Miao Erdong village in Xinlong county unloaded a whole lot of boxes and bags and then released 1000 snakes – everything from cobras to pythons. Needless to say the villagers were not amused, in fact they were livid. Most of them rushed for anything they could lay their hands on and started clubbing or hacking the snakes to death. Whilst all this mayhem was going on, others phoned the police and local authorities who were on the scene very quickly and arrested the releasers – some of whom have since been given hefty fines. The villagers are still up in arms as they only managed to destroy about half of the released snakes, and are now fearful about finding the poisonous creatures in and around their homes. 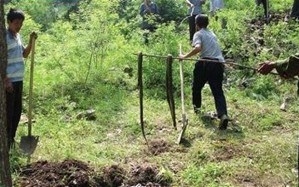 As far as the dog bitten by a rattlesnake is concerned, I just hope to goodness that some bunch of bunny-hugging Buddhists hasn’t decided to take the lazy option and just dump a whole lot of snakes in Beijing’s parks rather than way out in the countryside.

By the way – the word for a fear of snakes is Ophidiophobia – and I definately suffer from it.

Started my 60s by moving to China with my DH. Surprised to find I am still here in Beijing eight years later - still finding it an adventure!
View all posts by herschelian →
This entry was posted in Uncategorized and tagged animal release, beijing snakes, Buddhist compassion, fang sheng, karma, ophidiophobia, Rattlesnake, snakes. Bookmark the permalink.