As it was a public holiday yesterday – Duanwujie aka Dragon Boat Festival – AMM and I decided to pack a picnic and spend the day exploring various places in the South West outskirts of Beijing.   One of the places we wanted to visit was Lugouqiao  known in English as the Marco Polo Bridge.  Lugouqiao, literally translated means ‘Reed ditch bridge’. 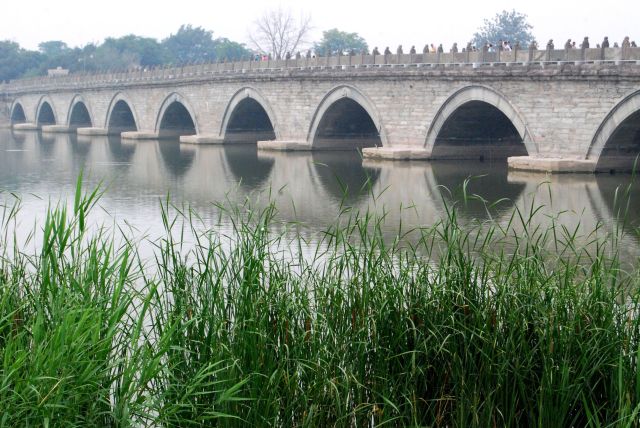 To say it was tricky to reach is something of an understatement as it is tucked down to one side of a major junction on Beijing’s 5th Ring Road. 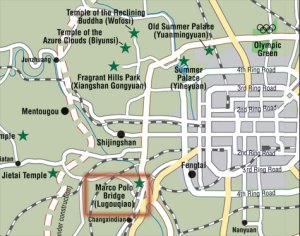 Despite having a local driver, several printed maps, GPS and Googlemaps on an iPad it took quite a few wrong turns, stopping and asking for directions etc before we finally got there. It was worth the effort. 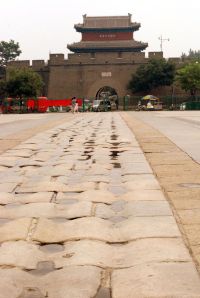 Approx 16 kms SW of central Beijing,  the bridge crosses the Yongding River and leads directly to the western gate of the small walled town Wanpingchen which was on the main road into Beijing back in the day. These days no vehicles are permitted on the bridge, it is strictly pedestrians only.

Built of granite, faced with marble, in 1192 AD it was the main western access to Beijing. It was damaged by flooding at the beginning of the 17th century which damaged two of the arches. It was substantially restored by the Emperor 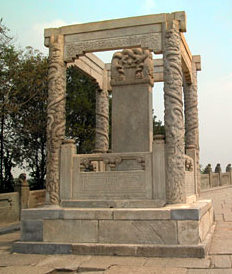 Kangxi in 1698AD,  and a stele marking the restoration stands at the western end of the bridge.

The bridge has 11 arches and is embellished with many carved lions, but only 489 remain of the original 627 .

Marco Polo saw the bridge in 1276 AD and he describes it in his famous travellogue, which is why it is known in the west as the Marco Polo bridge.

“ … a very great stone bridge … For you may know that there are few of them in the world so beautiful, nor its equal … It is made like this. I tell you that it is quite three hundred paces long and quite eight paces wide, for ten horsemen can well go there one beside the other … It is all of grey marble very well worked and well founded. There is above each side of the bridge a beautiful curtain or wall of flags of marble and pillars made so, as I shall tell you … And there is fixed at the head of the bridge a marble pillar, and below the pillar a marble lion … very beautiful and large and well made.”

In the modern era the bridge came to international attention when on 7th July 1937 the Imperial Japanese Army, who had already invaded Manchuria,  attacked the Chinese Army at the bridge 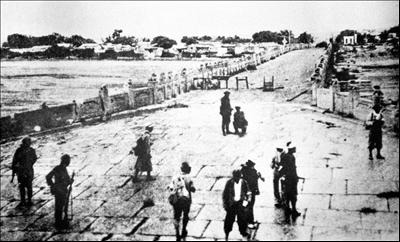 in their attempt to take Beiping (now Beijing) – thus beginning the ‘Eight Year War of Resistance’ which only ended when Japan was defeated by the allies (including China) in 1945.

This was a full four years before Japan attacked the USA at Pearl Habour and so for the Chinese it marks the start of what became World War II.

Crossing the bridge, I had a really strong sense that I was walking through history.

Started my 60s by moving to China with my DH. Surprised to find I am still here in Beijing eight years later - still finding it an adventure!
View all posts by herschelian →
This entry was posted in Places of interest and tagged bridges, carved chinese lions, Chinese War of Resistance against Japanese Aggression, lugouqiao, Marco Polo Bridge, Sino-Japanese War 1937-45, Wanpingchen, yongding river. Bookmark the permalink.