A nursery rhyme from China – with apologies to Mother Goose

These little piggies went to market –

These little piggies stayed at home –

These little piggies were tattooed 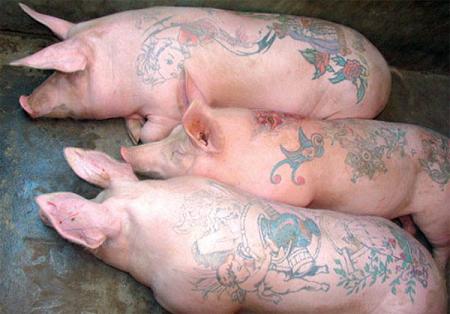 Whilst these little piggies went diving

Some little piggies were roasted

But these little piggies floated down the Huangpu River and polluted Shanghai’s water  supply.

At the latest count some 14,000 dead pigs have been pulled out of the river.   So far no official explanations for the situation have been given but ‘an investigation’ is being conducted. Unknown diseases and viruses have been ruled out.

Rumours abound. One being that some of the pig farmers in Zhejian province up-stream of Shanghai, have been regularly dosing pigs with arsenic which makes their skins appear soft and shiny.  If they get the dosage wrong the pigs die.  Recently there has been a huge government crack-down on black market sales of pork, with many of the black-market dealers rounded-up and arrested. This means that the farmers have had no-one to sell the poisoned dead pig carcasses to on the quiet, so to dispose of the bodies they have just been dumping them in the river.  Of course, the implication of this rumour is that previously the contaminated pork had been entering the food chain, whereas now the pigs just contaminate the water supply.

Sales of bottled water have gone through the roof.

Started my 60s by moving to China with my DH. Surprised to find I am still here in Beijing eight years later - still finding it an adventure!
View all posts by herschelian →
This entry was posted in Uncategorized and tagged dead pigs, diving pigs, Huangpu river, nursery rhymes, pig village, pigs, roast pig, tattooed pigs, tattoos. Bookmark the permalink.