Over Zhongqui Jie (Mid-autumn festival) AMM and I, together with some friends, took the high-speed train down to Wuhan, a city which straddles the mighty Yangtze River almost 700 km inland from Shanghai. Amongst other things, we wanted to see the Tomb of the Marquis Yi of Zeng   曾侯乙 which was discovered intact in 1977.  All the contents of the tomb are now displayed in the Hubei Provincial Museum in Wuhan.

The Marquis Yi of Zeng, also known as Duke Yi, was the ruler of a small state under the domination of the Chu at the beginning of The Warring States period in Chinese history.

These amazing bells were set on two lacquered wooden racks perpendicular to each other, and the bells hung on three levels in eight groups. Five musicians are required to play them. Each bell produces two tones depending on whether it is struck on the center or on the side. The whole set covers a range of 5 octaves.                               The largest bell weighs 203.6kg and the smallest a mere 2.4kg.

Now I should confess that I am not in the slightest bit musical – don’t get me wrong, I enjoy music of course, but unlike my daughter I cannot play an instrument nor sing in tune. The finer technical points of classical music and opera go straight over my head.    I should also say that when it comes to Chinese antiquities give me porcelain any day – so looking at a set of ancient bronze bells is not really my thing, even though I admire the technical skills that were required to produce such masterpieces.  When it was suggested that we went to a short concert where the bells and other ancient instruments replicating those found in the tomb would be played I was hardly enthusiastic. However, not wanting upset any of the others I dutifully went along. 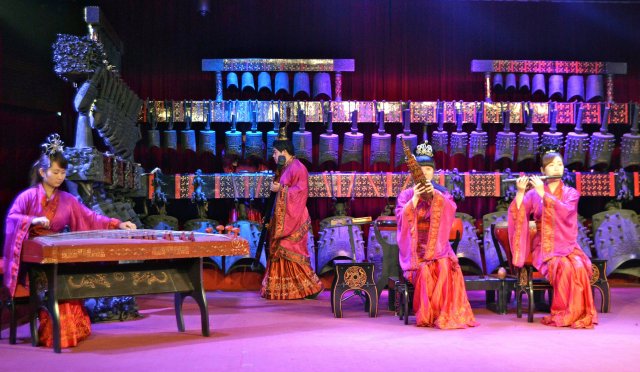 To my amazement I was absolutely blown away – the music was stunningly beautiful.  It had a haunting charm which made me think of all the 2500 years the bells had been silent, buried in a tomb.

Fittingly, the musicians chose a piece of ‘modern’ music to end the concert, played on the bells together with the stone chimes, Beethoven’s Ode to Joy was indeed a joy to hear.

Started my 60s by moving to China with my DH. Surprised to find I am still here in Beijing eight years later - still finding it an adventure!
View all posts by herschelian →
This entry was posted in Travel, Uncategorized and tagged ancient musical instruments, bells, bianzhong, bronze bells, Chinese museums, Duke Yi, Hubei Provincial Museum, Marquis Yi of Zeng, Wuhan. Bookmark the permalink.

3 Responses to The Marquis Yi of Zeng’s musical bells