Rubbish, trash, garbage – whatever you call it – modern living generates vast quantities of the stuff, and when you have a city the size of Beijing with a population of 20-22 million it is an unimaginable amount. In most parts of the world there is an increasing emphasis on recycling waste materials where ever possible.
Surprisingly, Beijing is high up on the list of cities which are really good at this, with almost 90% of its rubbish being recycled – for comparison you should know that Moscow recycles 15%, London 34% and New York 40%.
How does Beijing do it so successfully?

One of the sights that is typical of life in Beijing is the rubbish collector on his/her bike. Every day, from mid-afternoon onwards, the major roads have a steady stream of cyclists with huge loads of rubbish balanced on the back of their bikes, heading out of the city.

Beijing relies on these collectors to manage recyclable garbage. Watching them cycle along is fascinating. In the late summer I was waiting for my husband at the junction of two roads one evening and lost count of the number of the bicycle rubbish men going by.

Attempts have been made to quantify this system, but they have never succeeded primarily because these collectors – an estimated 170,000 of them – are migrant workers with no rights to live in Beijing; therefore they prefer to remain anonymous and needless to say do not pay any taxes.

This incredibly ad hoc system seems to work – whereas in the UK, local authorities brow-beat their rate-payers with ever more draconian rules and rigid regulations about sorting domestic garbage, and still don’t achieve such a good result. 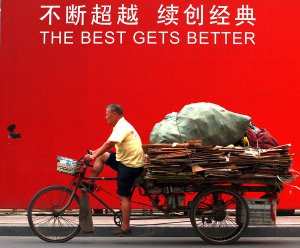 What happens in Beijing is this (as far as I have been able to work out): the bicycle collectors specialize in particular materials such as cardboard, plastic, iron, polystyrene etc. Apartment blocks and office buildings get visited by bicycle collectors who take away their particular type of waste. 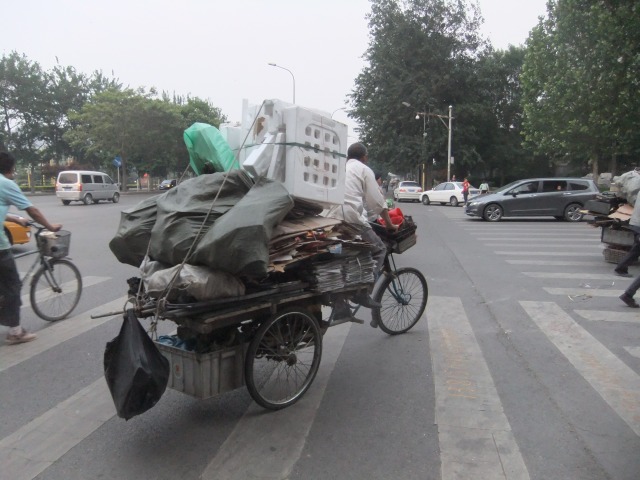 In the big shopping areas and other places, every public waste bin is watched like a hawk by someone seated nearby – often a beggar, alcoholic or mentally unstable person. Whenever a cardboard coffee cup, paper or plastic water bottle is put in the bin they fish it out and put it into a bag. When the bicycling collectors go by, they sell their 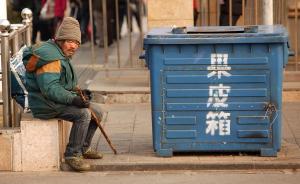 booty to them for a few kuai. The bicycle collectors take their loads out to the fringe of the city where there are dozens of small recycling stations who buy the waste from them. These small recycling stations re-sort the waste (did you know that there are 10 types of recyclable plastic?) and several times a day they load the different materials  into small trucks and take everything even further out of the city  where they sell to the bigger recycling centers such as Qianbajia and Dongsanqi,  yet again the waste is sorted, processed and sold on.
These big centers reprocess the waste in numerous ways, but that is another story entirely!

As they say in Yorkshire “where there’s muck there’s brass”.

Started my 60s by moving to China with my DH. Surprised to find I am still here in Beijing eight years later - still finding it an adventure!
View all posts by herschelian →
This entry was posted in Uncategorized and tagged Beijing bin men, Beijing garbage collection, bicycle garbage collectors, garbage, migrant workers, recycling, rubbish, waste disposal in Beijing. Bookmark the permalink.