Chop it to make it legal

Chops have been used for thousands of years to give legal ‘signature’ to documents, affidavits, proclamations and so forth.  The earliest use of chops was in the Shang Dynasty ( 1600-1046 BC).  Over the centuries their use became more and more widespread, and now they are an essential aspect of Chinese culture.

The Chinese do not call chops ‘chops’ and unless they speak English they will look blankly at you if you use that term.  What we call a chop they call yinzhang  印章 . We take the word ‘chop’ from the Hindi term ‘chapa’ or the Malay term ‘cap’ both of which mean ‘stamp’ or rubber stamp, and we (British) probably started using the term during the time of the British Raj and it has stuck.

If you have ever seen any Chinese paintings, you may have noticed a smallish red square imprint to one side of the painting/print – that is the artist’s chop. 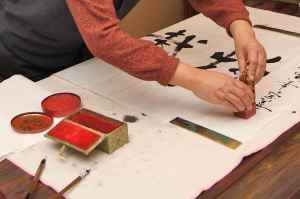 Calligrapher affixing his chop to a piece of work

The chop is used by  pressing it into an ink pad – traditionally a shallow dish with a cake of cinnebar powder mixed with either pulverised silk or castor oil and moxa punk to make a sticky red substance known as zhusha 朱砂 -and then pressing it onto the document.

Chops can be very large – when it is a Provinicial government or multi-national company chop for instance – or relatively small, and they can be made of stone, bamboo, ivory (in the past) or metal though nowadays some of the chops used in shops and other commercial enterprises are made from rubber or plastic.

The price for a blank chop ranges from many thousands of kuai down to a modest amount. There are many specialist shops which sell a huge range of blank chops,

and once you have made your selection you take it to a ‘chop carver’ who will carve your name onto the stamp end of the chop.

Some people like to choose chops decorated with the animal of their birth year according to the Chinese zodiac, others like an intricate pattern of flowers or birds, some prefer them plain,  each to their own aesthetic preference.

The chop carver will show you a sheet with all the different character carving styles for you to choose from, and you will have to decide whether you want your chop to have a ‘positive’ or ‘negative’ imprint – ie whether the characters should stand out in red on a white background or white characters on a red background (my choice). 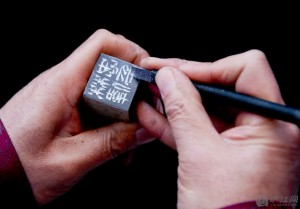 It is as well to be guided by the carver as he will have experience as to what will look best with your characters and the shape of the blank chop you have chosen.

Businesses in China have never worked with any single individual having the power to sign documents on behalf of the company.  Agreements are usually between companies and not between individuals.  Therefore any document must have the company chop affixed to it to make it legal, and the company chop is usually kept securely under lock and key to prevent internal fraud, or the chop falling into the wrong hands.

There is another way that chopping business documents prevents fraud. When an agreement, minutes of a meeting, or other legally binding document consists of several pages  these are fanned out and the chop is stamped in such a way that each page carries part of its impression. This makes it impossible for anyone to insert other pages at a later stage and claim that they were part of the original.  Even the most mundane of invoices and receipts must be chopped . So if someone out here says ‘has it been chopped?‘ they mean ‘has the deal been legally signed’.

A year or two ago I was talking to a friend who was, in his teenage years, a member of the Red Guards. In 1976 when Mao Zedong died, he and his comrades refused to believe the news until they went to their local city hall and saw the official announcement complete with the Chinese Government chop.  ‘When we saw the chop‘ he told me ‘we knew it was true.’

I have no less than two chops of my own, inscribed with my Chinese name (Mai Zhe Ying)

– but only ever use them to mark books I have bought, or sometimes when sending a Birthday card to someone back home because they are always intrigued by it. Chops make a wonderful gift to take back to friends in the west;  and tourists in China are often persuaded to purchase a chop with their own name carved on it as a souvenir.

Started my 60s by moving to China with my DH. Surprised to find I am still here in Beijing eight years later - still finding it an adventure!
View all posts by herschelian →
This entry was posted in Uncategorized and tagged Chinese business practices, Chinese culture, chops, cinnebar paste, legal documents in China, seals, yinzhang. Bookmark the permalink.

8 Responses to Chop it to make it legal