Why didn’t I think of that?

One of the things you discover when you come to China is that everyone has an ‘English’ name as well as their proper Chinese name.   Chinese people firmly believe that no foreigners can pronounce their names so in order to get good jobs and succeed in life they need a name that Westerners will feel comfortable with, and will remember.

In a way this is understandable, it is true that on first meeting it is often difficult to take in and recall a Chinese name. However, Japanese people have equally ‘difficult’ names if you look at it like that, yet the Japanese have never seen the need to equip themselves with a Western name and they get on in the wider world just fine.

This whole English/Chinese name conundrum hit me again this week when a new member of staff joined the concierge group at our residence. She is a delightful young woman who speaks little English, but she is very willing and very helpful.  Her English name is ‘Friday’.  Why did she choose it? or did she, like 70% of Chinese, get given it by her teacher when she was at school.  Should I gently hint that this is not really considered a ‘name’ in the English sense? it could cause all sorts of complications – if an English speaking  resident says to her ‘I expect a delivery on Friday’ or something like that, confusion can set in.

English language teachers here in China are, on the whole, Chinese citizens who have learned the language without ever meeting any native English speakers.  They seem to choose names on a very arbitrary basis, from books, films, western t.v. programmes, advertisements, catalogues and even calendars.  If a student makes it into a good university here in China they may well change their name to one they think is better/more appropriate, but sometimes they jump from the frying pan into the fire – for instance a young man who changed his English name from Gerry to Hitler because he thought that Hitler was a strong, courageous and famous western leader!

Many Chinese have no idea that their name is inappropriate.  My DH was interviewing a very clever, well-educated young woman for a job that would take her to Edinburgh on a regular basis. Her chosen English name was Lolita.  After the interview he felt he had to be blunt, and told her that she could not work in the financial sector in the UK or anywhere else in the west with that name, because  it would give out all the wrong messages, and that she should get advice and choose a new, less provocative, English name.

English speaking Westerners living in China are often asked to suggest names for people. Over the years I must have named a couple of dozen individuals! 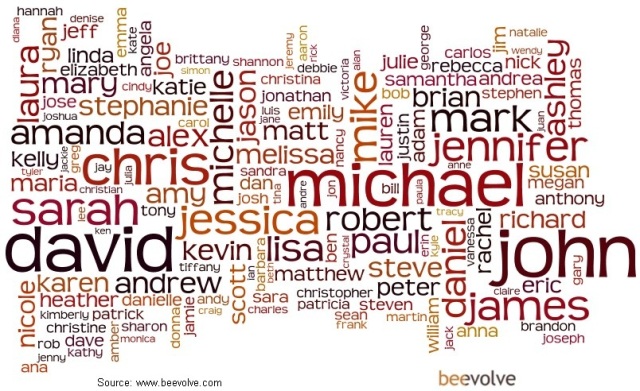 Some years ago I was down in Kunming and a young man called ‘Fred’ was introduced to me by his new boss. The boss said very firmly that he had been looking at names, and he thought that English speakers would consider ‘Fred’ to be the name for a labourer, not a new young executive.  Fred had been given his name by his teacher when at school.           We all sat down with some green tea and discussed names, finally settling on Jeffrey. In a nano-second Fred was dead and Jeffrey, like a phoenix, rose from the ashes. He is still Jeffery and now a very successful chap. He always greets me warmly, and whispers in my ear -‘do you remember Fred?’.

In the UK/US media there have been a couple of articles about two young women – one American, one English – who have set up websites to help Chinese parents choose their baby’s English name.  The websites are in Chinese, they are interactive, and after a few tick-box type questions they supply a choice of three or four names. They both charge a flat-fee for the service.  According to everything I have read, business is booming and both are earning a tidy little income.

Why didn’t I think of doing this?  All this time I have been handing out free naming advice, never thinking the concept could be monetized – obviously I am not a natural entrepreneur – I could have been rich by now….boo hoo!

Started my 60s by moving to China with my DH. Surprised to find I am still here in Beijing eight years later - still finding it an adventure!
View all posts by herschelian →
This entry was posted in Uncategorized. Bookmark the permalink.

16 Responses to Why didn’t I think of that?