Chinese proverb of the week: 10

When a snipe and clam quarrel, the fisherman benefits.

This is a very old proverb dating back in Chinese history to The Warring States Period (approx 476 – 203 BCE).   The State of Zhou planned to attack the State of Yan. Su Dai, an envoy from Yan, went to see the King of Zhou and told him the following parable:

One day a snipe was flying over the beach when he saw a clam lying open in the sunshine. ‘That will make a good morsel to eat’ he thought and flew down and snatched at the clam’s flesh with his beak. Feeling a sharp pain, the clam immediately clamped his shell tight catching the snipe’s beak.  The snipe kept trying to shake the clam off his beak but failed.  Furious by now the snipe said  ‘It won’t rain today or tomorrow so if you don’t open your shell and release me you won’t get any water and you will die of thirst!’ The clam replied ‘Do you think you can eat me you stupid snipe? if I keep hold of your beak like this, you will die of hunger!’    Whilst they were arguing in this way, a fisherman came along, and before they had noticed him he grabbed them both and took them back home for his supper.                                                                                             Needless to say, the King of Zhou understood the tale, and called off the attack on the State of Yan, thus preventing other states from taking advantage of their dispute.

This little story with its message that a third party will take the advantage when two others are fighting about their own interests, is very, very well known, and the proverb is frequently used.

It  is told to children when they are quite young.  There are many picture books, animated films, and even apps for smart phones and ipads all recounting the tale of the snipe and the clam.

The Taiwanese  postal service has even put the proverb on one of their postage stamps. 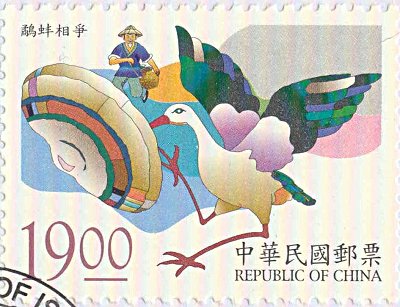 Started my 60s by moving to China with my DH. Surprised to find I am still here in Beijing eight years later - still finding it an adventure!
View all posts by herschelian →
This entry was posted in Uncategorized and tagged Chinese culture, chinese proverbs, clam, snipe, snipe and clam, Warring States Period. Bookmark the permalink.

4 Responses to Chinese proverb of the week: 10