Expedition to the Watermelon Museum

Beijing, being the capital city of China, has no shortage of museums from the sublime to the unusual, and some which seem downright weird.

Getting there turned into something of an expedition.  I had found an address for the museum but when I looked it up, it was outside the municipal area covered by the Beijing City Map Guide .  It seemed to be quite some distance south of the city, in a village just off an expressway.

Blow the expense I thought, I’ll get a car with driver to take us there and bring us back.  Phoning Charlie, the driver I use from time to time, I outlined my plan. Charlie was sceptical. He assured me that he really knew everywhere of interest and he’d never heard of it – wouldn’t we rather go on a nice afternoon outing to the Great Wall instead?  No we would not! – been there, done that, got the T-shirt.  So after much grumbling he agreed to drive us.

Accordingly we set off just after lunch on a very hot Sunday afternoon. We drove south on the 4th ring road, crossed over to the 5th Ring Road, still driving south we came to the 6th Ring Road and drove on, and on, and on.  Phalanxes of grim tower blocks marched across the horizon on either side of the motorway – this is where many of Beijing’s workers live.    The roads were chock-a-block with traffic heading into the city – at least we were going in the opposite direction.

After an hour and a half we left the motorway and asked the toll-booth attendent if he knew where the museum was. Of course not – why would he?  But suddenly as we drove on there it was,  in all its watermelony glory! 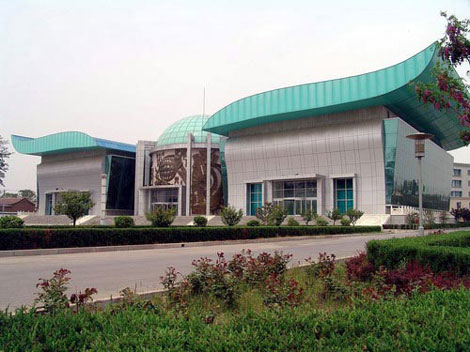 Most museums are heaving with people on Sundays so I was concerned it might be rather over crowded, but it was the only time Charlie was available. To my surprise, when we swung into the enormous car-parking area there were only three cars…. we had the pick of the shady spots to park.

As you can see from the picture, it is a modern building , a central domed entrance hall and two wings.  The entrance fee was 20RMB and the two lassies manning the ticket desk looked absolutely amazed to see two hot, red-faced, laowai intending to visit. In fact they seemed surprised that ANYONE would visit the museum.

As my BFBJ and I strolled into the first section of the museum we were stunned by the shiny black marble floor, flashing disco-lights and faux bronze statues of men and women carrying watermelons.

It was as though we were in an episode of  Monty Python and we both became overwhelmed with the giggles and slightly hysterical trying to supress our snorts of laughter.

Charlie and the big watermelon

Charlie was most disapproving, he thought we were not taking the exhibits seriously and insisted I took his photo beside a whopping 88kg watermelon which he excitely informed us had grown in his own home town in Zhejiang province. Of course it wasn’t a real watermelon – none of the 400 varieties on display were real – they were all resin replicas! There were several examples of the specially grown square watermelons which are very popular as gifts. 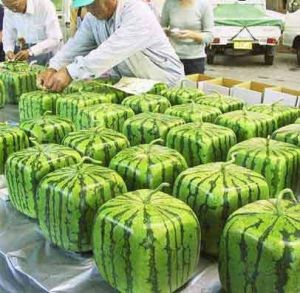 The second section of the museum was all about the history of the watermelon, how it came to China along the Silk Routes, how it is cultivated etc.  The word for watermelon in Mandarin is xi gua  which means ‘western melon’.  This section also provided us with a stunning moment as we rounded a display board and discovered a large model of a space capsule apparently spinning through th

e heavens with a watermelon carved to look like the earth down below it!  As far as we could tell from the captions (all being in Chinese) this was to interest children in the fact that on one of the first of China’s space programmes watermelon seeds had been taken into space to see if weightlessness would enhance or hinder germination.  But there didn’t seem to be any conclusion so I can’t enlighten you.

Outside, in the grounds of the museum there are a variety of sculptures of people eating watermelons dotted about in a grassy area grandly called a ‘Sculpture Park’.

What I am curious about is who decided that what Daxing district needed was a museum, and a museum all about watermelons at that?  Who funds it?  It is not widely known about, and there are hardly hoards of visitors clamouring to get in,  so it cannot be making any money.  You’d need a helluva lot of school trips to justify keeping such an obviously expensive building open all year round, and there seemed no evidence that such trips feature regularly. Its a mystery to me.

So if you are living in Beijing or coming on a tour of China, my advice is to eat some cool slices of watermelon at the end of a Chinese banquet, and don’t waste your time trekking out to visit this museum – I’ve done it for you, and it really isn’t worth the hassle. 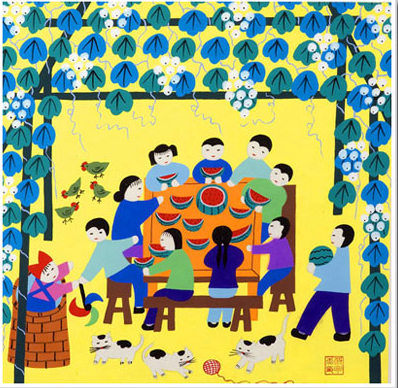 STOP PRESS:   While I’m on the subject of watermelons, here is a piece of useless information!

The oldest woman in China (if not the world) is 128 year old Ali Mihan who was born on 25th June 1886. She has been growing watermelons all her life.  She lives in Xinjiang (in the far west of China) where she has a 1.3 hectare smallholding on which she produces 16,000 watermelons each year. She has now decided to move with the times and  sell her melons online!

Started my 60s by moving to China with my DH. Surprised to find I am still here in Beijing eight years later - still finding it an adventure!
View all posts by herschelian →
This entry was posted in Museums, Uncategorized and tagged Beijing museums, museums in China, oldest Chinese woman, Watermelon museum, watermelons. Bookmark the permalink.

6 Responses to Expedition to the Watermelon Museum