This past week I have been rather pre-occupied by the arrival of my first grandchild – in fact I have been on cloud nine.  He is the most wonderful baby and I am completely besotted.  In fact I am going to indulge myself and post a picture of the wee man! Isn’t he gorgeous? 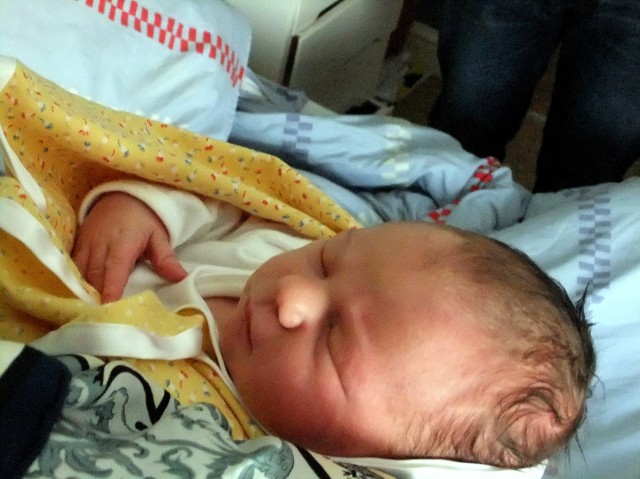 When Chinese friends knew my daughter was expecting a baby there was much discussion about what I would be called.  In Mandarin the names of relations are very specific and so you can tell the family relationship immediately.  For instance, the grandmother who is mother of the baby’s father is called ‘Nai Nai’ whereas the grandmother who is mother of the baby’s mother is called ‘Lao Lao’. Paternal grandfather is ‘Ye Ye’ and maternal grandfather is ‘Lao Ye’.  I’ve been watching the terrific Danish crime series ‘The Killing’ on TV, and I noticed that in the Scandinavian countries they do the same as the Chinese,  Mormor and Morfar being the maternal grandparents and Farmor and Farfar being the paternal side.  It makes it all so clear.

When I explain to people in China that in English there are a variety of traditional names for a grandparent but that they do not indicate the specific relationship they are very  surprised, and even more so when I say that the words ‘brother’, ‘sister’, ‘uncle’ and ‘aunt’ don’t explain  the family pecking order.  They find this all very confusing, and come to think of it, so do I.  They have specific names for ‘older’ sister or brother, ‘younger’ sister or brother, ‘father’s’ brother, ‘mother’s’ brother etc etc. In conversation you know immediately who everyone is and what the relationship is.  We lack this in English.

If someone in Britain is talking about their grandmother you usually find yourself asking ‘is that your mum’s mum or your dad’s mum?’

Just to really confuse things, I am to be called ‘Granjo’ – which explains nothing but suits me nicely – and anyway, the little chap may have his own name for me in the fullness of time!