When I was a small girl growing up in what is now Zambia,  I  remember there was a picture of a horse, a galloping horse, hanging in one of the rooms of our house.

It was a print, bought by my mother, and framed in teak.  What neither of us knew was that this was a reproduction of a painting by one of China’s most revered modern artists, Xu Beihong.  I had forgotten all about that picture until a week ago when my attention was drawn to a painting that is to be auctioned by Sotheby’s Hong Kong on Tuesday 3rd April 2012.  It too is of a horse, a galloping horse, and the moment I saw the catalogue memories of ‘our’ galloping horse came flooding back.

Xu Beihong is a towering figure in figure in modern China’s art history, and credited as the father of China’s modern art movement. He was one of the first Chinese to study art both in China and in the west, and he brought Western art styles and painting techniques back to China.  In 1953 when he was 58 years old he died suddenly of a heart attack; at the time he was the president of China’s Central Art Academy and also Chairman of China’s Artists’ Association .

Xu Beihong painted many subjects but it was his love of (one might almost say obsession with) galloping horses for which he is mostly remembered. 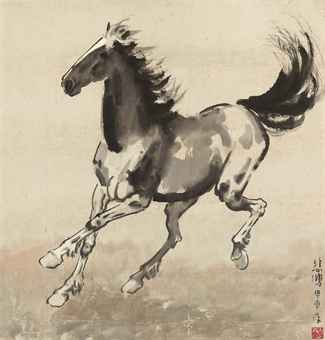 He painted dozens of  ‘Galloping Horse’ pictures during his lifetime, 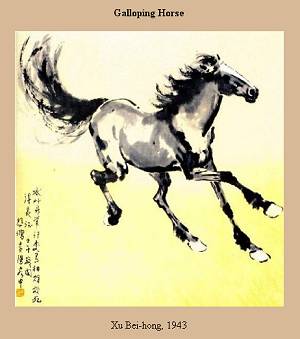 and to this day good Chinese artists avoid painting horses – “why bother if you know you can never match Xu’s horses, and  you don’t want to look stupid.”  Most Chinese art lovers believe that nobody in the world can paint horses better than Xu Beihong.

The Chinese title for his galloping horse paintings is ‘zhi zai qianli’ which means ‘dare to gallop a thousand miles’ and during the 1940s when China was under the boot of the Japanese Imperial Army, his paintings served as a reminder that the resolve to resist to the end, to be strong and never surrender – in effect to ‘gallop a thousand miles’ – was what the Chinese people needed to do. 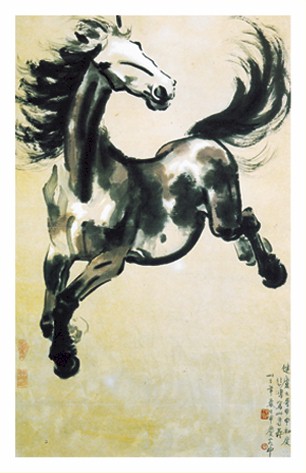 The painting on sale at the Sotheby’s auction next Tuesday was given by Xu Beihong to Dr Joseph Needham and his wife Dorothy in 1944.  Joseph Needham was one of the greatest Sinologists of all time, a British academic from Cambridge University he left China  in the late 1940s and started his massive work ‘The Science and Civilization of China’ which now comprises 24 volumes published by CUP.  When he was Master of Gonville & Caius College at Cambridge, he established an educational trust to further knowledge about China, its science, its culture, its people.  This has now become The Needham Research Institute which is unique as a global center of Sinology.

For years Joseph Needham’s ‘Galloping Horse’ was in Cambridge, put away safely and then forgotten about since his death in 1995.  Now it has come to light, and the NRI who need funds to continue their work have decided to sell it.   It is my fervent hope that some very rich Chinese organisation or individual will buy it and return the painting to China from whence it came.  Whoever does buy it will have the honour of purchasing a piece of history, a beautiful work of art, and the satisfaction of knowing that the price they have paid will go to the NRI and thus foster even greater understanding between China and the West.

I must acknowlege my good friend Bob Shi, who has an art gallery here in Beijing and who is amazingly erudite,  for educating me about Xu Beihong , and helping me on the path towards an understanding of Chinese art.

2 Responses to Galloping horse for sale