Family members – the more the merrier?

Posted on February 9, 2017 by herschelian

Many people in Britain dread the inevitable pressure of family gatherings at Christmas time. For a couple of days you are inveigled into spending time with relatives you normally keep at arm’s length.  The difficult uncle, the whiny brats who are your aunt’s kids, the ever-so elegant and hyper-critical sister-in-law etc etc.  Not to mention the cost: travel, appropriate gifts for everyone, contributions to the booze and the food, it all adds up.

Then there is the poor woman (I say woman because it usually is a woman) who is in charge of all the domestic arrangements: clean bedding/towels for all the extended family, having the neighbours over for mulled wine and nibbles, an endless round of meals- including the big one on Xmas day – catering for all the various complex dietary demands, frantically wrapping gifts at midnight on Christmas Eve. By the day after Boxing Day she is usually stressed out, and exhausted from trying to keep everyone happy, and just wishing they  would all bugger off home.

The same is true for Chinese families over the Spring Festival, Chun jie 春节  (aka Chinese New Year/CNY). 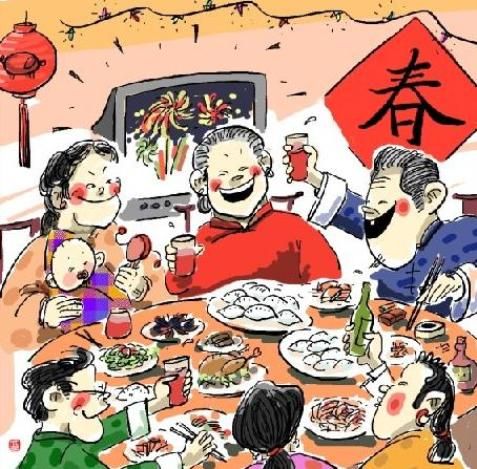 Everybody is expected to spend at least the first few days of the holiday period with their parents and family – even if that requires a trek of several thousand miles. The airlines are all booked up, the trains are full to capacity – millions are on the move. Mothers and aunties have been cooking up a storm – the fridge is bulging, piles of jiaozi 饺子 have been prepared, numerous bottles of Baijiu白酒  are available for the men to enjoy, decorations have been purchased and pasted up, red lanterns are aglow, and hong bao  红包(red envelopes containing money given to the children) have been prepared.

And when young Chinese adults get home, they face relentless questioning: “Do you have a girl/boy friend? why are you not married yet?   My friend’s daughter/son has married well, you shouldn’t be so picky, you are getting older; I will find someone for you.” And if you are married: “You’ve been married nearly one year already, why are you/is your wife not pregnant yet? I want a grandchild – a boy would be best”.    The pressure is enormous, and for Chinese who are LGBT is even more intense, as this is usually something they cannot admit to their parents, as they might lose face within the family and with friends and neighbours; they frequently get someone of the opposite sex from the LGBT community to stand in as a ‘fiancee’ which covers for both their families.      Then they all sit around  eating and drinking too much, letting off fireworks and watching the atrocious annual CCTV Spring Festival Gala on television.

This Spring Festival the whole of China has been talking about a Spring Festival family gathering of gargantuan proportions. The Ren family from Shishe village beside Shenzhou City in Zejiang Province had a monumental get-together.

Weibo (the Chinese social media platform) has been awash with comments, jokes, and questions about this CNY family gathering.  One wag asked if one of them met a family member of the opposite sex that they fancied at the event, would it be OK to marry them?  Another asked how many children were in the family, because it would cost a fortune in New Year hong bao.

Personally I am all in favour of such a huge gathering of the clan.  Less pressure on individuals, less time for individual spats, and no-one will argue that they want a traditional home cooked meal, and then announce that they are vegan.  Book a restaurant – actually book at least five restaurants!

Started my 60s by moving to China with my DH. Surprised to find I am still here in Beijing eight years later - still finding it an adventure!
View all posts by herschelian →
This entry was posted in Chinese festivals, Family life in China, Uncategorized and tagged Chinese New Year, family relationships, Spring Festival. Bookmark the permalink.

6 Responses to Family members – the more the merrier?